Net Promoter Score ®: NPS through the eyes of Webnode – Part 3

In the first two episodes of the Net Promoter Score® series, the popular tool for measuring customer loyalty, we introduced to you what this method actually represents, how we calculate it, and how to interpret the results. We also outlined its pros and cons. But all this was mostly just theory. In this episode of our series, we will reveal how NPS® works in practice, that is on an example of its use in Webnode, the online platform for building websites. Slawomir Budziak, Webnode’s Chief Customer Officer (CCO) shared his insights with us.

Contents hide
“NPS® is that itchy little something. Whether you react to the impulse and how and when you scratch, that’s up to you.”
What did it bring to the company? What has changed?
Webnode vs. the controversial rating scale

“NPS® is that itchy little something. Whether you react to the impulse and how and when you scratch, that’s up to you.”

In 2014, 3 main reasons contributed to the NPS® implementation process in Webnode, lead by 4 people from management: to proactively establish and maintain customer relationships, to stop customers from walking off, and to get product feedback. At the moment, NPS® is managed by the quality team. NPS® results and feedback on individual markets are always processed by those team members who speak the respective language. The CCO then receives overall data summaries in regular reports. “This is a huge amount of data and it’s very important how it’s handled and how the entire feedback processing is set up,” says Budziak.

In Webnode, it’s compulsory to respond to NPS®. Negative feedback such as product flaws, misunderstanding of it, or dissatisfaction with it, are considered a user requirement. This information is collected through an established process and forwarded to the product team. In the framework of prompt bug-fixing, primarily critical bugs are corrected. “A regular report typically contains specific, clearly identifiable data – this many users, from these countries, within this period. The volume, importance and profitability of the markets from which this feedback came then decides how it’ll be processed further, ”explains Budziak their internal processes. The final decision is then made by the product team.

Most of the feedback and NPS® itself is typically handled by customer care agents. Exceptional cases, such as aggravated situations, are then resolved by the CCO himself. “On the contrary, we try to apply the value-added principle to the positive feedback we receive – we provide the author with some useful tips, or share some product news that might interest them. They’re then leaving with a feeling that they have learned how to improve their user experience. It’s a kind of reward for their time devoted to writing the feedback” Budziak says. If the feedback is truly extensive, Webnode also tries to reward the author with tangible gifts, such as an extended service plan or a present. “Such satisfied reactions are very valuable to us and can also be used as a review, for example on one of the review portals,” he adds.

What did it bring to the company? What has changed?

Webnode sees NPS® as an interesting source of information, however, dealing with it also represents a certain administrative burden. “It’s a double-edged sword. On top of the usual customer queries, each month, there are hundreds of NPS® feedback responses that need to be further taken care of by Customer Care. These must be handled separately, which again requires time, will, energy, process compliance and control. It’s quid pro quo,” adds Budziak, smiling.

Correct setting in the company is crucial. According to Budziak, it is very important to determine at which point the NPS® invitation is sent. For example, when it goes to a customer in 8 months after purchasing a product, it may be too late. At that point, they could already have built an opinion that not even by the right care can be refuted and can eventually lead to losing the customer. The user might even have forgotten that he has bought the product in the first place. On the other hand, one month after buying may not be enough to establish a stable opinion. One month after the last use of the product might also make a difference. It varies with each company’s product and it is necessary to think it through properly in advance.

A good formulation of the message itself is also essential. First of all, it is important that the recipients understand it. The concept must remain the same, but the text can be modified to make it easier for the target audience to understand. “For a very long time, we have been asking ‘Would you recommend…’ but people obviously did not understand it. They took it too literally. So, many times, I’ve encountered an answer like ‘None of my friend has a website’. But we just want to know in theory, whether they can imagine that they would recommend us in a situation where a person would be looking for something like that. It would be better, for instance, to ask ‘In case you knew of someone who is also planning on setting up a website, would you tell them about Webnode?’ – different wording, same meaning, people will imagine it better,” explains Budziak. “Primarily, the evaluation is always more important than the fact that something is actually being recommended. We’re certainly planning to try out different variations of the question,” he adds.

Webnode vs. the controversial rating scale

Webnode perceives the rating scale itself and its layout as rather complicated. The company operates internationally and often wonders whether it is even possible to globalize the NPS®. In spite of the proven relevance of the extensive rating scale, it is doubtful whether the rating in different countries is not subject to cultural influence. “The differences between countries are really significant. It often occurs that a neutral rating of 7 arrives along with a feedback saying ‘really great!’. So what did they mean?” Budziak thinks. “The voluntary feedback then often adds to the controversy. For example, feedback from Norway is usually very austere and shows a reluctance to praise. Even a relatively low rating can actually represent great satisfaction. By way of contrast, we often see more positive results coming from other nations, such as those in South America. Czechs, perhaps because we are a Czech company, are generally very critical and often send extensive and detailed feedback”, Budziak describes his experience.

According to Budziak, the differences are deepened mainly by the fact that one has to really think about the evaluation and realize the value of the individual figures on the scale. And to do that, the nation’s culture and temperament can be of a real impact. But even so, it records that if a person evaluates 9 or 10, he thinks it really seriously. And even though the assessment of rating varies from country to country, in a vast sample of data this factor is rather disappearing. Thus, NPS® remains statistically relevant.

“In addition, over the years of working with NPS®, we have found that the collected NPS® data can also be viewed as a disintegration of individual values. You can then compare how many of the received ratings were 0, 1, 2, etc., in which months, in which countries, and so on. Including the differences between Critics’s ratings and without eliminating Passives. The whole can then be put into graphs for you to get a new perspective. Graphs can be compared between each other, you can see how things move and nobody needs to count, it’s visual and individual ”, says Martin Souček, CMO of Survio.

As we can see, the NPS® is mainly about how the company decides to use it. Whether it is for motivation, to indicate a problem, or just to review and maintain customer relationships, it needs to be well thought out and set up. In the fourth and final part of our NPS® series, we will show you how to easily and efficiently create NPS® directly in Survio and provide you with examples, advice and tips. Follow us, ask questions, write notes and leave comments via Facebook, Twitter or by email and don’t miss out on anything!

Create your own questionnaire or survey for free

Setting up your first survey is quick and straight forward. Choose from one of 100 predefined templates or create your own from the scratch. Start getting your first responses in 5 minutes.

Create your own survey

Net Promoter Score®: How to process the NPS results – Part 2 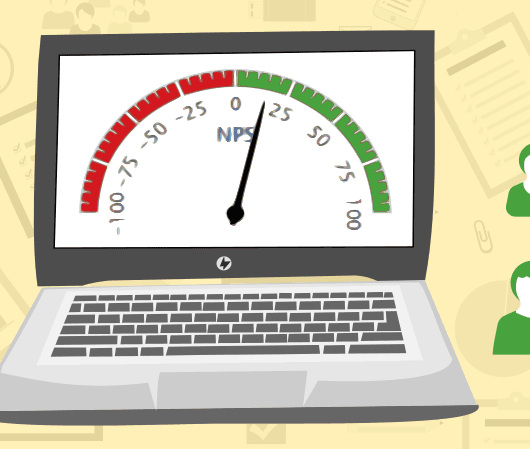 Net Promoter Score®: How to process the NPS results – Part 2

Create your survey easily and fast

Create your own survey